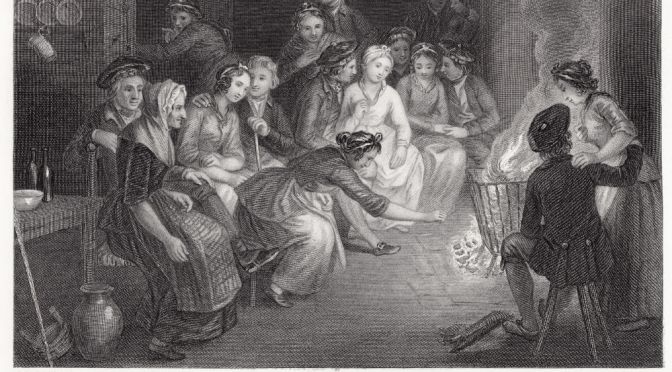 Upon that night, when fairies light
On Cassilis Downans dance,
Or over the lays, in splendid blaze,
On sprightly horses prance;
Or for Colean the route is taken,
Beneath the moon’s pale beams;
There, up the cove, to stray and rove,
Among the rocks and streams
To sport that night.

Among the bonny winding banks,
Where the river Doon runs clear,
Where Bruce once ruled the martial ranks,
And shook his Carrick spear,
Some merry, friendly, country-folks,
Together did convene,
To burn their nuts, and pile their shocks of wheat,
And have their Halloween
Full of fun that night.

END_OF_DOCUMENT_TOKEN_TO_BE_REPLACED

On Hallow-Mass Eve, ere you boune ye to rest,
Ever beware that your couch be bless’d;
Sign it with cross, and sain it with bead,
Sing the Ave, and say the Creed.

For on Hallow-Mass Eve the Night-Hag will ride,
And all her nine-fold sweeping on by her side,
Whether the wind sing lowly or loud,
Sailing through moonshine or swath’d in the cloud.

The Lady she sate in St. Swithin’s Chair,
The dew of the night has damp’d her hair;
Her cheek was pale – but resolved and high
Was the word of her lip and the glance of her eye.

She mutter’d the spell of Swithin bold,
When his naked foot traced the midnight wold,
When he stopp’d the Hag as she rode the night,
And bade her descend, and her promise plight.

He that dare sit on St. Swithin’s Chair,
When the Night-Hag wings the troubled air,
Questions three, when he speaks the spell,
He may ask, and she must tell.

The Baron has been with King Robert his liege,
These three long years in battle and siege;
News are there none of his weal or his woe,
And fain the Lady his fate would know.

She shudders and stops as the charm she speaks;
Is it the moody owl that shrieks?
Or is that sound, betwixt laughter and scream,
The voice of the Demon who haunts the stream?

The moan of the wind sunk silent and low,
And the roaring torrent had ceased to flow;
The calm was more dreadful than raging storm,
When the cold grey mist brought the ghastly form!

You agree that the use of this website and all information and content contained herein is at your own risk and there is no warranty expressly made herein.

You agree to hold the Dimmick family harmless for any property damage, personal injury and/or death, or any other loss or damage that may result from the use of the following information, tools, materials and/or techniques.